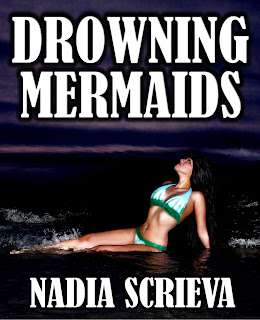 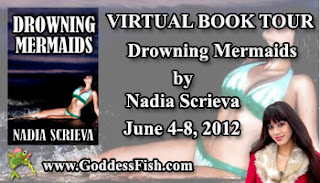 This review is done in conjunction with the author's virtual tour with Goddess Fish Promotions. Nadia will be awarding a "Drowning Mermaids" beer mug to one randomly drawn commenter on the tour as well as bookmarks to randomly drawn commenters at every stop, so comment today AND follow the tour (if you click on the tour banner above, it'll take you to a list of her tour stops) -- the more you read and comment, the better your odds of winning. You could be introduced to a great new author AND win a cool prize!

Deep under Arctic waters lies an ice kingdom carved into a glacier. Those who dwell within it possess magnificent biological secrets. Due to the dangers of impending war, the Princess of Adlivun is forced to flee her undersea utopia and regroup with her sisters in Alaska.

Captain Trevain Murphy is a successful king crab fisherman who has spent his life building his empire above the sea, and knows nothing of the empire beneath it. When he meets a mysterious dancer whose father has recently died, he extends kindness towards her, unaware of her unique genetics and royal lineage.

Trevain's attraction to the enigmatic Aazuria Vellamo will involve him in dangerous designs that will forever change his life, and his perspective on himself and his world. He embarks on perilous journeys in which he will need to release all of his insecurities and inhibitions in order to survive.

I really looked forward to reading this story because I haven't read any romances about mermaids before. It sounded unique and fascinating. It turned out to be both those things and so much more. The story revolves around a mermaid named Aazuria, as well as her two sisters, and two friends. They are living and working in Alaska trying to obtain enough money to purchase weapons with which to fight their enemies in the waters below.

Aazuria is the princess of her icy kingdom and is called back to assist in preparing for war. She returns back to the Captain’s home briefly to warn him not to sail for a while. He disobeys and heads out to sea. Meanwhile the war has escalated and he is drawn into the battle.

I was never certain how this story would end, and it kept me completely interested until the last page. I sat and read this in one sitting -- and it's not a short book! There were many twists and turns to the story, and the characters were so clearly defined that I was totally invested in finding out how they would be affected by the things that were happening. These mermaids were not the kind we normally think of. They did not have tails, for instance, and except for the fact that they lived under the sea, they could have been mistaken for any human.

Nadia Scrieva is very talented and has created an amazing and engaging fantasy world. I enjoyed reading Drowning Mermaids and hated to have it end. I would highly recommend it to paranormal romance lovers. 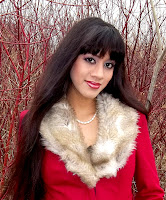 Nadia Scrieva was born in 1988 in Toronto, Canada. She studied English and Anthropology, graduating with an Honors B.A. from the University of Toronto in 2011. She likes knives. Writing has been the most meaningful part of her life since she was a child. Nadia loves receiving feedback from readers, so do not hesitate to contact her with any of your comments, questions, ideas, or just to say hello.