Death in the Family by Lanny Larcinese

This post is part of a virtual book tour organized by Goddess Fish Promotions. Lanny Lanny Larcinese will be awarding a $25 Amazon/BN GC to a randomly drawn winner via rafflecopter during the tour. Click on the tour banner to see the other stops on the tour.

Great question. I am a crime writer with a strong noir influence. To me, noir is like blues music, a frame of mind, a way of seeing the world and people that expresses in thought, word and deed. That would be me. For my stories, sustaining our better angels is a constant struggle against a bevy of natural tendencies (e.g., tribalism, selfishness) that want to fight it. My stories are about those struggles.

Even struggle is holy.

Quirk: I am given to long, serpentine sentences written as much for rhythm and musicality as information contained in them. Such writing is a no-no in most crime writing. I usually have to break them up during edits but it galls me.

Pantser all the way. I can no more look at a blank page on my Word program than on a yellow legal pad. If I knew what to put in an outline, I’d just go ahead and write it.

A roll of paper towels: I have all kinds of pollen allergies and my sinuses are a raging rapids. 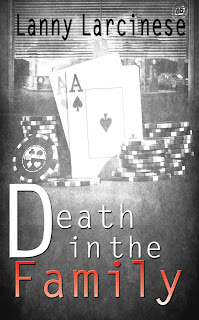 Donny Lentini is a talented young man hungry for his mother's love. To please her, he becomes guardian angel to his mob-wannabe father. When the father is murdered and found with his hands hacked off, Donny is dealt a set of cards in a game called vengeance. The pot is stacked high with chips; the ante, his soul and the lives of loved-ones. With the help of friends—ex-con, defrocked Jesuit Bill Conlon along with former high-school nemesis, Antwyne Claxton—he digs for whether the murder had anything to do with the mob's lust for a real estate parcel owned by the family of Donny's lover. He's new at this game. He doesn't cheat, but plays his cards well. And he gets what he wants.

My foot slid over to touch Dad’s.

“Is this about the money you lost at the table?” I said. “Should we play a few more hands?” I kept my eyes fixed on his.

Dad reached over and put his hand on mine.

“I didn’t lose the office cleaners,” he said. A bead of sweat meandered toward his jaw. “The union was working on ’em going back three years now. It was a done deal by the time I got there. Don’t I otherwise do good?”

“Whatever,” German said. “Just don’t let it happen again. And tell Donny here to mind his manners or you’ll be back driving a truck.”

The baseball bat leaning in a corner was an exclamation point punctuating German’s directive. If it came down to that I’d slash his throat with a rusty knife. Yet I had to walk a tightrope. Dad would have preferred the bat to the demotion. He was a climber and German his future.

German picked up a couple of coded folders and put them into a filing cabinet, slamming the drawer down its rails like a runaway train.

“Oh, and Joojy wants to see you. I don’t know about what.”

“You don’t hear? I said I don’t know! Maybe that thing. Now get outta here, both yiz. I got to take my daughter to ballet.” ” 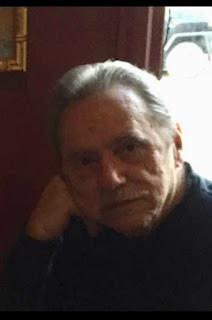 Lanny Larcinese ‘s short work has appeared in magazines and has won a handful of local prizes. He lives in Philadelphia, Pennsylvania. He’s a native mid-westerner transplanted to the City of Brotherly Love where he has been writing fiction for seven years. When not writing, he lets his daughter, Amanda, charm him out of his socks, and works at impressing Jackie, his long-time companion who keeps him honest and laughing—in addition to being his first-line writing critic. He also spends more time than he should on Facebook but feels suitably guilty for it.