An Unlikely Goddess by Mohanalakshmi Rajakumar - Virtual Tour and Giveaway 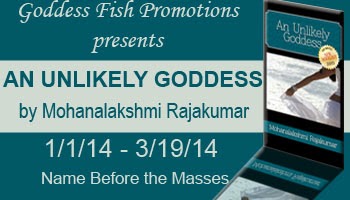 This post is part of a virtual book tour organized by Goddess Fish Promotions.

I’ve written everything from academic books about hip hop dance to memoirs about being a first time mother or living in the Middle East and of course, fiction, short stories and novels. I write what I’m interested about and in the age of the indie author I have that flexibility. Readers can choose which of my work interests them: the fiction, the non-fiction, or the academic. I was drawn to writing commercial work because I spent years on academic work that never saw the light of everyday conversation; it’s important and part of my life but I had stories to tell outside of analyzing literature.

All of my books have cultural backgrounds that attract readers who want to read about those places/people or want to make sure their realities are accurately captured. This is why for each book I have a cultural reader; for An Unlikely Goddess it was several people of South Asian background who helped me make sure I got all the details - words, spellings, practices – true to life.

I learned from Sita to be fearless and not worry about what people will think if they find out you like learning. We have stereotypes for women in almost every culture; you’re either pretty or smart. You can’t be both. Well this is a book about going your own way.

I write all the time: either researching, editing, revising, or creating. I’ve had quite a long pipeline for these 8 books. So I’ve promised myself a break for 2014! {sequel in progress for my Qatar novels}

Plotter. I’m a Virgo. We love order. Nothing like an outline to give you something to go on when you get stuck.

A king size bed in a suite in Vegas. Yup, on vacation from the kids for 4 days. And I’m writing this interview while hubs is playing. Will take a break later.

Paperback editions! After almost two years for digital books, I’ve had my first paperback released and planning for the rest, one every 6 months.

Which of my books would like you like to see in print next? Memoir or a novel?

Sita is the firstborn but since she is a female, her birth makes life difficult for her mother who is expected to produce a son. From the start, Sita finds herself in a culture hostile to her, but her irrepressible personality won’t be subdued. Born in India, she immigrants as a toddler to the U.S. with her parents after the birth of her much anticipated younger brother. Her father’s academic ambitions take the family all over the United States, as he chases grant funding at universities in several states. His financial challenges make life at home stressful for Sita, her mother, and younger brother – but the women of the family bear the brunt of his frustrations – both physically and emotionally. Hers is a South Indian family, from Tamil Nadu, one of the most conservative states in the subcontinent.

The Hindu goddess, Sita, is said to have been born from the Earth.

King Janaka discovers the beautiful infant and in her beauty, believes in her divinity. He raises her as his own daughter……

Unlike her namesake, Sita's first mistake was being born.

A girl, her mother thought, eyes dark in abject terror. What if he leaves me? She swallowed, increasing the dryness in her post-delivery mouth, the stiches across her abdomen itching. No water. Only ice chips until her bowels passed the tests. Mythili pressed back against the pillows. She closed her eyes, pushing her fingers into the sockets until the darkness was punctuated by bone-white stars. She wished she could as easily tune out the gurgles of the baby in the bassinet beside her.

Yet, even premature and unwanted, Sita was obliviously happy to enter the world, beaming her infant smile at anyone or anything she saw: the nurse, her aunt, her mother's back, the noxiously-pink cement walls of the Madras hospital in which she found herself. Several pounds underweight, she was otherwise fine—a petite, brown-skinned baby with tufts of black hair crowning a smooth scalp. How could she be expected to know that from her first breath she was, and always would be, a living reminder of her mother's failure to produce a first-born male heir?

Though swaddled and placed in the bassinet immediately after delivery, her eyes were alive with motion. She blinked up at the faces of passersby, but they were admittedly few, so instead, she followed the blinking lights, the creeping shadows and the occasional appearance of a nurse. Everything about the world kept her busy with delight until sleep washed over her little body.

“Look at that smile,” the young nurse said, cradling Sita against her flat bosom.

Instead of replying, Mythili, Sita’s mother, pulled a see-through blue sheet up to her chin and turned her face away. 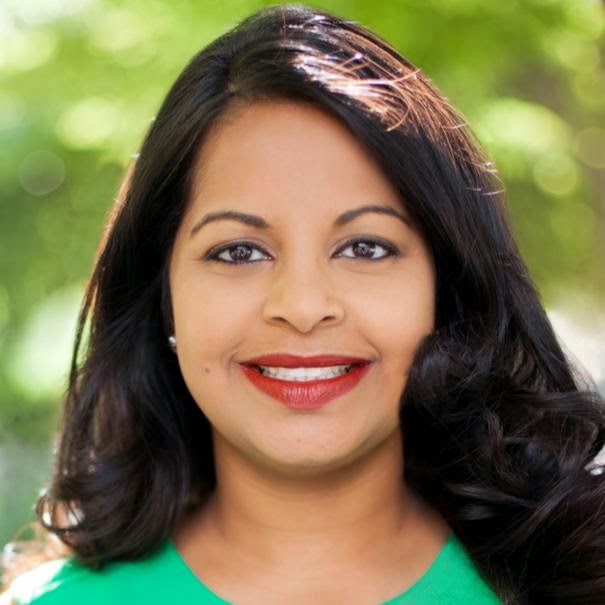 Mohanalakshmi Rajakumar is a South Asian American who has lived in Qatar since 2005. Moving to the Arabian Desert was fortuitous in many ways since this is where she met her husband, had a baby, and made the transition from writing as a hobby to a full time passion. She has since published seven e-books including a mom-ior for first time mothers, Mommy But Still Me, a guide for aspiring writers, So You Want to Sell a Million Copies, a short story collection, Coloured and Other Stories, and a novel about women’s friendships, Saving Peace.

Her recent books have focused on various aspects of life in Qatar. From Dunes to Dior, named as a Best Indie book in 2013, is a collection of essays related to her experiences as a female South Asian American living in the Arabian Gulf. Love Comes Later was the winner of the Best Indie Book Award for Romance in 2013 and is a literary romance set in Qatar and London. The Dohmestics is an inside look into compound life, the day to day dynamics between housemaids and their employers.

After she joined the e-book revolution, Mohana dreams in plotlines. Learn more about her work on her website at www.mohanalakshmi.com or follow her latest on Twitter: @moha_doha.