Shadows of Damascus by Lilas Taha - Virtual Tour and Giveaway 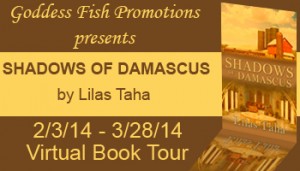 This post is part of a virtual book tour organized by Goddess Fish Promotions One randomly drawn commenter will win a $50 Amazon or Barnes and Noble gift card. Click on the tour banner to see the other stops on the tour.

Bullet wounds, torture and oppression aren’t the only things that keep a man—or a woman—from being whole.

Debt. Honor. Pain. Solitude. These are things wounded war veteran Adam Wegener knows all about. Love—now, that he is not good at. Not when love equals a closed fist, burns, and suicide attempts. But Adam is one who keeps his word. He owes the man who saved his life in Iraq. And he doesn’t question the measure of the debt, even when it is in the form of an emotionally distant, beautiful woman.

Yasmeen agreed to become the wife of an American veteran so she could flee persecution in war-torn Syria. She counted on being in the United States for a short stay until she could return home. There was one thing she did not count on: wanting more.

Is it too late for Adam and Yasmeen?

A handwritten, old-fashioned note, not an email or even a phone call. Before he opened the envelope, Adam checked the handwriting for a clue to its sender. The writing wasn’t familiar. The letter had no return address, only a five-day-old stamp from Turkey.

At the kitchen table in his two-story farmhouse in the late afternoon, he studied the unopened envelope. He ran his fingertips over the name, Adam Wegener, a name he officially adopted as soon as he turned eighteen, right before he joined the army. Wegener was his mother’s maiden name, and he decided to use it the day he severed ties with his father. Adam would no longer be a Shipman.

When he came home after his medical discharge from the army, his small circle of friends downsized to one, Jonathan. As for family, his mother passed away and his father lost the privilege the day Adam threw him out. Who cared enough to send him a handwritten letter?

With a heavy heart, he opened the envelope. He read over the slanted handwriting, some words crossed out, as if written in a hurry. He locked on the signature, O.R. Pemssy. He sounded out the name but it triggered no familiarity. He folded the letter, placed it on the table, and clasped his hands on the wooden surface.

Five years since he left Iraq. These written words threw him head first into that time. A stream of images filled the space around him. A slide show of faces, proud soldiers, weapons in hands. Faces twisted in pain, many stamped with the stillness of death that soon followed.

The sun made its final dip behind the horizon. The letter on the table riffled in the light breeze from the window. He picked it up and read it again. The signed name didn’t match the face in his head. Big brown eyes, dark thick eyebrows and a matching mustache. Fadi Jabir, the Syrian interpreter with the annoying accent.

Before he shipped off to Germany, Fadi paid him a visit while he lay bandaged and disoriented from morphine in the Army base hospital. His jumbled memories of that visit scattered like pieces of a jigsaw puzzle. He remembered Fadi’s face, a painful handshake, and a promise being made. The rest dispersed into emptiness. He owed his life to Fadi, no question about it. But whose signature was this? Who was O. R. Pemssy?

Unfolding his body from the chair, he switched the lights on, and went for a glass of water. Fadi’s selfless act invaded his mind many times over the years. Attempts to locate him through army records failed, information blocked by military regulation. Further inquiry led him to the name of the private company that contracted Fadi from Syria to U.S. troops in Iraq, but the company dissolved and no credible records remained.

Now, he had this mysterious letter in his hands, asking him to start from the beginning, and no way to do a damn thing about it. Exhaling in frustration, he took his cold glass outside to the front porch.

The summer breeze, pregnant with the intoxicating smell of flowering jasmine, took him back to the time he planted the bush with his mother. He must have been seven, and he remembered her excitement when she found it in a nursery. Later, he helped her plant the apple tree in front of her bedroom window, and a couple of years after, the pear tree by the barn.

He collected a few jasmine flowers and went inside. He filled a small bowl with water and deposited the delicate collection. The fragrance filled the area around him. He walked to the table and thumbed the letter again. How could he reach Fadi?

He flipped the paper to check the backside, nothing. Holding it against the light, he searched for clues, and then dropped the letter, and picked up the envelope.

The Turkish stamp and the date seemed legitimate, nothing more to see in that. He concentrated on the signature, the only thing that didn’t make sense.

Adam wrote the words of the signature on separate lines, trying combinations for the letters, comparing them with Fadi’s full name. After an hour of futile work, he massaged his stiff neck. He opened his laptop and searched the name in its entirety, then separately. Nothing solid surfaced.

The evening sky melted into night, and his frustration intensified. He pinned the letter on the fridge door with a magnet and paced.

Fadi wanted something. Something dangerous. Otherwise why the secrecy and the ambiguity, using an alias? He wanted Adam to contact him, so how could he do that? Write a letter? There was no address. Call him? No number. Start from the beginning. Start what? Start counting?

He took a pencil and circled the letters, counting them and assigning numbers in succession. The first O is at number two. The R is either forty-seven on the first line or one on the second line. The P is at number six on the third line. He worked through the script.

The process gave him a number with ten digits starting with area code 216. Was this possible? Did he crack a code? Fadi knew how his crazy mind worked? Knew him well enough to send him a coded number? Why? What was so secretive?

He went online to find which city the area code covered. Cleveland, Ohio. Jumping to his feet, he snatched the phone handset and checked his watch. Past midnight. His fingers hovered over the dial keys. Was it too late to call? What’s the worst that could happen? Get cursed at? What if this wasn’t Fadi, and the whole thing was a set up? Who would screw with him like that?

He returned the handset and drew back. It couldn’t be this urgent if the sender chose a coded letter to contact him. Better wait until morning, when he had some rest and could think clearer.

He headed upstairs. Passing through the living room, he looked around, feeling the emptiness, recalled memories often more bitter than sweet. He stopped in front of the mantle and turned his attention to the framed document above, his grandfather’s will, leaving him the farm. About halfway down the paper, one line was underlined. Adam ran his eyes on the typed words out of habit. He committed them to memory years ago. His grandfather explained the decision of passing the farm to Adam instead of his only son in two simple sentences.

Fred Shipman is a bad seed and shall not inherit The Shipman Farm. Full ownership shall be instated with my grandson, Adam Shipman.

Dejected and mentally drained, he moved on to his room, and set his alarm clock to four a.m. He’d use the extra thirty minutes before milking time to go over the letter again, see if he missed anything. Maybe he was taking this coding thing too far. Maybe there was no number there, and he was just as obsessive as he’d always been. And maybe he was on to something, something that would cut through this tedious life of his.

Stretching on his bed, he heard his heartbeat, fast and loud. Too long since he felt this charged. Too damn long since he had something to look forward to when he walk up, anything to make him forget the usual nightly visits of his dead friends.

About the Author: Lilas Taha is a writer at heart, an electrical engineer by training, and an advocate for domestic abuse victims by choice. She was born in Kuwait to a Syrian mother and a Palestinian father, and immigrated to the U.S. as a result of the Gulf war in 1990. She earned a master’s degree in Human Factors Engineering from the University of Wisconsin- Madison. There, Lilas met her beloved husband and true friend, and moved with him to Sugar Land, Texas to establish a family. She is the proud mother of a daughter and a son. Instead of working in an industrial field, she applied herself to the field of social safety, working with victims of domestic violence.

Pursuing her true passion for creative writing, Lilas brings her professional interests, and her Middle Eastern background together in her debut fictional novel, Shadows of Damascus.

a Rafflecopter giveaway
Posted by MJ Thomas at 12:00 AM