The Price of Justice by Alan Brenham - Interview and Giveaway 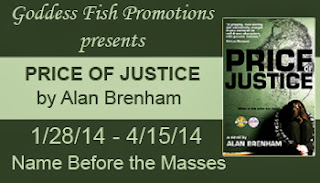 This post is part of a virtual book tour organized by Goddess Fish Promotions. Alan will be awarding a $50 Amazon Gift Card to a randomly drawn commenter during the tour. Click on the tour banner to see the other stops on the tour.

After spending over thirty years working in the Texas criminal justice system as a law enforcement officer, prosecutor, defense attorney, and Assistant General Counsel with the Texas prison and parole agency, I felt fairly familair with what goes through a street cop’s head and what life on both sides of a criminal trial was all about. So writing crime fiction seemed a logical choice. Plus, I have a goldmine of cases and experiences to dredge up and use to create believable plotlines and scenes.

Both legal and police technique research is required to make the story believable.

So much has changed in police procedures since I had been a detective. I cultivated friendships with various law enforcement agents to educate me about the latest techniques in a criminal investigation and exactly what a police crime lab can do.

The legal research side is a lot easier in that I stay current with the criminal aspects of both prosecution and defense. Maintaining an active bar license requires that I attend on-going legal education every year.

Name one thing you learned from your hero/heroine?

Dani Mueller taught me that the bond between a mother and her child runs deeper than I ever imagined. She’s willing and capable of doing whatever it takes to protect or, in Dani’s situation, to avenge a wrong heaped on her child.

Every morning, before beginning work on a manuscript and after booting up the computer, I always, without fail, follow a set routine of loading the toolbar with the mailbox first, the Word document I’m working with that day next, the Google browser third, and last the Firefox browser. To do it any other way, takes me out of my comfort zone.

I’m without a doubt a plotter. I prepare an outline of the story, character sketches, and some initial research.

Look to your right - what’s sitting there?

A large comfy lounge chair I use to work through writer’s block, and to think through ideas of how to ruin my protagonist’s day.

I’ve recently completed the revisions suggested by my publisher for my book, Cornered. I will be working on the revision for my third novel, Rampage.

I don’t have a question for them but if they have any, I’ll be glad to answer them.

His focus is on solving the murders—until the unthinkable happens…

Recently widowed, Austin Police Detective Jason Scarsdale works to solve the murders of two pedophiles, while trying to be both mother and father to his five-year-old daughter. During his investigation, Scarsdale is forced to navigate between the crosshairs of two police commanders out to get him. Drawn to Austin Police Crime Analyst, Dani Mueller, who has also suffered tragedy, Scarsdale fights both his attraction and his suspicions that something just isn’t right…

She is hiding a secret, one that could not only cost her a job—it could end her life…

Dani hides a deadly past. After her daughter was brutally murdered, Dani exacted her revenge then changed her name and fled to Austin. But if her secret ever gets out, she knows there is no place she can hide from the murderer’s vicious family.

Pulled into a web of malice and deceit, Scarsdale and Dani discover the value of breaking the rules. Then just when they thought things couldn’t get worse…they do.

Today Susan’s worst nightmare would become a horrible reality, and I knew exactly how she felt when she walked past me on her way to the witness stand. The jurors’ eyes scrutinized her every step as she neared the witness chair just like the jurors in Burton’s trial did to me. That chair sat behind a white pine modesty panel, next to the judge’s elevated bench. Susan would be center stage like I had been two and a half years ago.

She seemed to be trying hard to maintain her composure, but I could tell by the way she shifted in the witness chair, the way her hand alternately covered her mouth and toyed with the gold cross dangling around her neck, that she was anything but composed. Testifying was a nerve-wracking experience. No, actually, it was a terrible experience—it had been for me and it would be for Susan, too.

I figured Susan’s heart must be in her throat by now. Her stomach churning so bad she probably wanted to vomit. The loss of a child was a terrible hurt that a mother never recovered from, and having to relive it in front of a room full of strangers, staring and hanging onto her every word, would make it a hundred times worse. I hoped for Susan’s sake the system worked this time. It didn’t for me.

My name is Dani Mueller and I used to be a defense attorney and crime analyst in Sacramento, California, under another name—Karla Engel. But all that life was gone now. Seven years practicing law and a life—a once happy life I shared with my ten year old daughter, Katarina—wiped away by a maniac’s sick frenzy, a maniac named Doyle Burton.

Alan Brenham is the pseudonym of Alan Behr, an American author and attorney. He served as a law enforcement officer before earning a law degree. He worked first as a prosecutor then defense attorney for the next twenty-six years. His travels took him to several European and Middle Eastern countries, Alaska and almost every island in the Caribbean. While contracted to US military forces, he resided in Berlin, Germany for a few years. Alan and his wife, Lillian, currently live in the Austin, Texas area. He has authored two crime fiction books, Price of Justice and Cornered, and is working on a third titled Rampage.