Swept into the Darkness by Lataeya Lane - Guest Blog and Giveaway 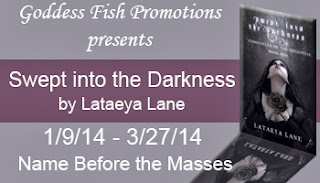 This post is part of a virtual book tour organized by Goddess Fish Promotions. LaTaeya will be awarding a $50 Amazon GC and an autographed paperback copy of the book (US ONLY) to a randomly drawn commenter during the tour. Click on the tour banner to see the other stops on the tour.


Five things that readers don’t know about me

First and foremost I would like thank It’s Raining Books for being a tour host during this promotion. Thank you so much for your support. I will not be able to comment during the day because I work in the class, but as soon as I can I will stop by. Thanks! L.L.

There are so many things that my readers don’t know about me. I’ve thought long and hard about this question and I hope everyone finds my responses entertaining.

1. I love to go out and dance and have a good time. There was a time during my early twenties when I was out every weekend clubbing in New York with my friends. Our weekends started on Thursday nights and ended on Sunday nights. I think that I’ve been to almost every club or bar in Manhattan, and Queens. Now that I am a wife and mother, I can’t remember the time I’ve been to a club. (LOL) Sleep is my best friend now, Smile.

2. My husband and I got married in Las Vegas. We a small wedding ceremony at a beautiful little chapel, then had our reception at the Mandalay Bay hotel and Casino.

4. I love watching General Hospital. I started watching it in the 90’s. I love the excitement, the danger and all the other things that make the show so interesting and intriguing.

5. I started writing when I was seven years old. I wrote my first novel when I was 16. Strangely it wasn’t in the fantasy genre, since fantasy is my first love. My very first book was a crime novel about two bothers Jonathan and Edward Carmain. One bother was a police detective and the other was a mob boss. The story was about how Jonathan (the detective) struggled to survive and fight against crime and corruption in a city as his bother makes every attempt (no matter how deadly) to recruit him to join the mob.

Meet the Author: Years of exposure within the writing and publishing world have made a lasting impact on Author LaTaeya Lane. Writing since she was seven years old, Lane began jotting down phrases and themes later turning them into poems and short stories. Writing became such a passion throughout her youth that she became the Junior and Senior editor of her High school newspaper. She wrote her first novel at age sixteen but was not seeking publication at that time in her life. Lane entered several creative writing contests during her early years of writing and won a few of them. Always captivated by the supernatural and elements of fantasy, Lane was inspired to write a series of books that focused on going beyond the boundaries of life and imagination. The angel vampire fantasy "Swept into the Darkness" is Lane's first published book in a series called "Chronicles of the Celestial." Lane completed a degree in Liberal Studies and currently works to support the education of special needs, middle school students. Lane resides in New Jersey with her husband Leo and son, and is working on writing and publishing the other four books in the series, Dark Betrayal, Dark Revenge, Dark Defiance, and Dark Revelation. Lane also loves to draw and paint. Traveling and experiencing a variety of different foods is also a deep passion of hers. Lane loves watching horror and fantasy movies and is a believer of the Ancient Alien Theory. Some of her favorite authors include, Charline Harris, Stephen King and Erick Von Daniken.

Sydney London is no ordinary twenty-four year old. Ever since she was a child she has had unique out of this world abilities. Suffering from a near death experience and surviving a deadly car crash Sydney is no stranger to death and loss. Cut off from the world around her she encounters an Angel and eventually falls for him inspired by deceitful magic.

Her one true love awaits in the shadows attempting to guard and protect her by risking his immortality. Traumatized by the murder of her best friend she sets off on an unspeakable journey to bring the dead back to life. Sydney's journey of self discovery opens her up to learn of her true angelic identity. She is led in the middle of an inter dimensional war among a hybrid breed of Angel Vampires and the Hierarchy of the Angelic clan. Will her unique powers and the love she bears for her guardian be enough for her to save the Earthly Realm or will she be Swept into the Darkness?

Buy the book at Amazon
Posted by MJ Thomas at 4:00 AM