Review: Once and Forever anthology 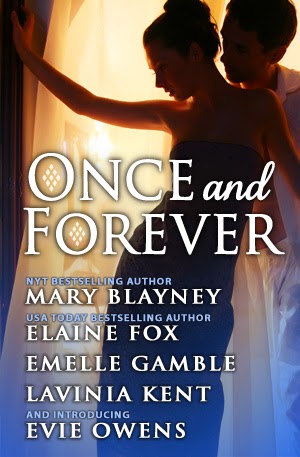 Once and Forever - An anthology

By Mary Blayney, Elaine Fox, Emelle Gamble, Lavinia Kent and introducing Evie Owens From five compelling authors, five original novellas which will make you laugh and cry, and believe in a love that once found will last forever. Meet a duke, a psychic, a bodyguard and a professor…and one "guardian fairy" in absorbing stories ranging from regency and contemporary romance to paranormal and women's fiction.

Playing for Keeps by Mary Blayney

Actress Kendall Marshall is determined to get an autograph for her sick sister from famous TV personality Mike O’Hara, the Oprah Winfrey of sports. In the process she meets his brother, security consultant Steve Marshall, lands a job on O’Hara’s show and gets in the way of a man set on causing big trouble. As the stalkers attacks escalate, Steve and Kendall are thrown together and find it impossible to ignore the chemistry between them.

The Princess & the Pinot by Elaine Fox

When a beautiful woman shows up at the Vineyard Inn, wine manager Kim is certain she’s been sent by fate for the inn’s owner, Cooper. Self-effacing to a fault, Kim knows she can’t hold a candle to Principessa Bella, who also seems to know even more about wine than Kim herself, but her heart has belonged to Cooper since they shared one kiss as teenagers.

While Prin sweeps easily into the job of sommelier at the renowned inn, Kim is afraid Prin will sweep just as surely into Cooper’s arms if she doesn’t do something about it. Can she tell Cooper how she feels without losing even his friendship?

Kim is willing to try except for one problem: she’s almost certainly losing her mind. Or is that belching, swearing, smoking, farting fairy – who claims to be trying to help her – real?

Duets offers alternating looks into the lives of two women who would seem to have little or nothing in common.

Screen star Molly Harper is on the verge of marrying a man who has swept her off her feet, thought perhaps hasn’t swept all her feelings for her first love away. Anne Sullivan, happily married for twenty-five years, is fighting to hold onto the man she loves, and hold off a confrontation that could shatter her family’s image of what they are.

Duets confronts a past secret that ties these two women’s lives together, just as chance events turn Molly and Anne’s worlds upside down.

Never and Forever by Lavinia Kent

Never and Forever is the beginning of the love story of two people who shouldn’t belong together. Molly, Miss Wilkes, runs an employment agency helping women of quality find positions perfected suited to their characters. Although her father held the title of Earl for just over a week before his death, Molly has never wanted to be a lady. She knows her place in this world – and it is not at the center of society.

The Duke of Radford also knows his place in this world – and it’s above everybody else’s. He cannot imagine a world without all the privilege and power that comes from being Radford. He’s had foreign princesses and heiresses dangled before him for years. Why would he ever have interest in a simple woman who doesn’t even understand that she should want to be a duchess?

Can these two overcome the obstacles of their own beliefs and realize that love can make all things possible?

Never and forever are both a very long time. Where will their love fit?

The Psychic Detective by Evie Owens

Psychic Martin Sterling doesn't trust cops--and the feeling is mutual. Detective Erin Healy needs more than a ghost story to save her job and reputation. Her partner is dead, a million dollars in drugs and money is missing, and all the evidence points to her.

Can a sexy psychic and a by the book cop, trapped between the living and the dead, unearth the truth? Or will a cold-blooded killer get away with it all...

My review:  Overall I had considerable mixed feelings about this anthology.  Some stories I loved, some I wasn't as enamoured with, but overall it was certainly a worthwhile read and a great way to find out about some new authors (whose books I'll be buying for sure!).

I enjoyed Playing For Keeps quite a lot.  I loved the author's voice and style, and the characters were fun and interesting. I do wish the story had been long enough to really get to know both sets of siblings better ... we only get a taste of the two who aren't the primary H/H, but it looks as if they may have their own story and I'm going to hunt that sucker down.  The story itself was cute, if a bit predictable and the heroine, Kendall, was a hoot. She certainly kept Steve on his toes.  This rates as one of the my favorite selections of the book.

I had a love/hate relationship with The Princess & the Pinot.  I loved the hero and heroine and most of the storyline, but I did not love the fairy.  I think the author was touching on the Princess and the Pea with Prin as well, and I honestly wish the time spent with the fairy had been spent on more character development.  I could see so much potential, and I think the conflict and premise of the story would have stood on its own without the addition of that element and would have given her more space to create a stronger story.  I wonder, too, if Prin is going to have her own story someday.

Duets was an anomaly in this anthology.  The other stories were clearly romances, but Duets was not.  It is womens fiction pure and simple, so was a bit of a disappointment to this romance reader.  That said, however, the author is clearly talented.  Her writing is well done, concise and interesting and her characters well developed.  If she wrote in a genre I enjoyed more, I'd be a steadfast fan. If you're a fan of womens fiction, you could do worse than reading Emelle Gamble.

Never and Forever was both annoying and frustrating, but also did its job well -- I'm sold on Lavinia Kent.  She made her characters so real, and the story incredibly interesting. What was annoying? That it was more a "moment in time" story with no real ending, than an actual complete story. When I came to the end, I sat in shock when I realized there was no more to the story and had to restrain myself from tossing my ereader at the wall.  I was so angry!  I wanted a resolution, I wanted satisfaction ... I wanted more. Kudos to the author for making this a story and characters I cared about so much.  This couple had BETTER show up again and finish their story, or I will find the author and shake her.

My favorite story of the anthology was The Psychic Detective.  Complete (and after Never and Forever, this was a HUGE plus), fun and unique, it made me want to start over and read it again as soon as I was done.  It had adorable, interesting characters that mattered to me and a plot that was intriguing and fun.  I've never read this author before, but I'm definitely adding her to the list of ones to watch.  If she can entertain me this much again, she'll have a hardcore fan.

Again, overall this was a neat set of stories in a plethora of genres which allowed me to get a taste of authors I'd never read before.  None were wall-bangers and I'd say that I enjoyed the writing style and voice of every author in the collection.  If you're looking for a sampler, and to add some new authors to your list of ones to buy, I'd recommend this as a good place to start.