The Maid of Milan by Beverley Eikli - Review and Giveaway 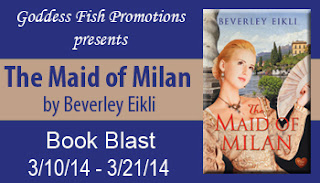 This post is part of a virtual book tour organized by Goddess Fish Promotions. Beverley will award a $20 Amazon book voucher and a digital copy of The Reluctant Bride to a randomly drawn commenter during the tour. Click on the tour banner to see the other stops on the tour.

After three years of marriage, Adelaide has fallen in love with the handsome, honourable husband who nurtured her through her darkest hours.

Now Adelaide’s former lover, the passionate poet from whose arms she was torn by her family during their illicit liaison in Milan six years previously has returned, a celebrity due to the success of his book The Maid of Milan.

High society is as desperate to discover the identity of his ‘muse’ as Adelaide is to protect her newfound love and her husband’s political career.

The following scene takes place when Adelaide has discovered that not only is she in love with the husband she reluctantly consented to wed, but that she wants him to be in no doubt about her desire to take intimacy to a higher level. Adelaide’s mother has perpetuated a lie to hide her daughter’s sinful past, telling Tristan that Adelaide is an invalid who must be kept calm at all costs if she is not to succumb to hysteria.

Tossing aside the bed covers, Adelaide shifted to make room for him, snuggling against his chest when he yielded slightly, nevertheless terrified of his reaction. She was blatantly seducing – no, trying to seduce – her husband for the first time in her life and she had no idea whether he’d be horrified or delighted. She just knew she had to convey to him her receptiveness for taking intimacy to a higher level.

So far so good. He was breathing more rapidly, she noticed, as he carefully removed his boots. She willed him to hurry. She was on fire. She closed her eyes in anticipation, her mind whirling with all the possibilities of what she might say, but the words with which she’d intended to unburden her heart were lost in the passion of his kiss. Scorching. It shocked her, as did the speed with which he moved now as he caged her body with his, his hands roaming over her as he trailed hot kisses along her jawline, down her neck, across her décolletage. Adelaide arched with impatience, resisting the urge to be the one to unbutton his trousers.

‘God, Addy, I love you,’ he muttered as he gripped the hem of her shift to raise it, nuzzling her neck. ‘I’ve never loved any woman as I love you. Are you sure you want—?’

Her reassurance that she’d never wanted anything so much was truncated by a sharp rap on the door and her mother’s nasal whine on the other side.

‘Addy? I’ve brought you something to help you sleep. Can I come in?’

Horrified, she and Tristan bolted upright as the door knob turned.

‘Wait, mother!’ Addy pulled the covers up to her chin as Tristan leapt to the floor, straightening his cravat and pulling on his boots with lightning speed.

‘Why, Tristan …?’ Mrs Henley’s cloying smile didn’t fool Adelaide. ‘I didn’t know you were here. I’m so sorry to interrupt.’

Adelaide felt like seizing the mug her mother carried with such false solicitude and hurling it at the wall. Instead, she hurled herself back down onto her bed with a sob as her husband bowed before leaving the room.

I began reading this story expecting it to be another typical Regency romance. Wrong. This was certainly not a typical story of any kind.

Addy is married to Tristan and loves him dearly. However, he doesn’t really allow himself to get very close to her. Her mother appears to actually hate her, and does everything in her power to disrupt her marriage. In spite of this, Addy is beginning to get closer to Tristan and her to her.

Then Tristan’s best friend, James, comes to town with his very young fiancé, Beatrice. Unknown to Tristan and Beatrice, James and Addy had been involved years before, and she had become pregnant with his child. Upon his return, he spends most of his time neglecting his young fiancé, and chases after Addy. She now wants nothing to do with him, realizing what a mistake she had made in the first place.

She spends so much time trying to avoid him, while her husband keeps trying to encourage her be more friendly to him. I really began to love both Tristan and Addy, and hoped that they could work out their difficulties. It was almost impossible, however, as her mother kept putting everything possible in the way of her happiness.

I kept reading and hoping for a happy conclusion, but couldn’t figure out how it could possibly end happily. This author was wonderful and managed to surprise me with the ending and the result was not what I expected but even better.

I highly recommend this story to anyone who is not looking for a typical romance. This is even better. I give it 4 flowers.

Beverley Eikli is the author of eight historical romances. In 2012 she won UK Women's Fiction publisher Choc-Lit's Search for An Australia Star competition with her suspenseful, Napoleonic espionage Romance The Reluctant Bride, which has just been shortlisted by Australian Romance Readers for Favourite Historical in 2013.

In 2011 she was nominated for an ARRA award for her Regency romance A Little Deception, and in 2012 for her racy Regency Romp, Rake’s Honour, written under her Beverley Oakley pseudonym.

Eikli wrote her first romance when she was seventeen. However, drowning the heroine on the last page was, she discovered, not in the spirit of the genre so her romance-writing career ground to a halt and she became a journalist.

After throwing in her job on South Australia's metropolitan daily The Advertiser to manage a luxury safari lodge in the Okavango Delta, in Botswana, she discovered a new world of romance and adventure in a thatched cottage in the middle of a mopane forest with the handsome Norwegian bush pilot she met around a camp fire.

Twenty years later, after exploring the world in the back of Cessna 404s and CASA 212s as an airborne geophysical survey operator during low-level sorties over the French Guyanese jungle and Greenland's ice cap, Eikli is back in Australia teaching in the Department of Professional Writing & Editing at Victoria University, as well as teaching Short Courses for the Centre of Adult Education and Macedon Ranges Further Education.

Buy the book at The Book Depository or Amazon 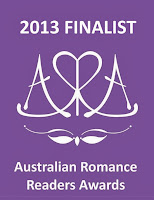