The Riddle of Prague by Laura DeBruce - Virtual Tour and Giveaway 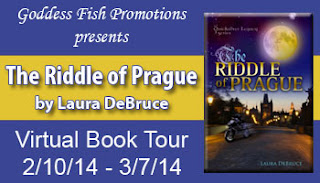 This post is part of a virtual book tour organized by Goddess Fish Promotions. Leave a comment or ask the author a question for a chance to win a $50 Amazon/BN gift card via the Rafflecopter at the end of this post. Click the tour banner to see the other stops on the tour.

A special welcome to Laura DeBruce who has stopped by to answer a few questions.

Do you ever read your stories out loud?

Yes! I love to do that if there’s an audience willing to listen. Although I have a dear friend who is an actress so if she’s around I’d rather listen to her read them.

What are your future ambitions?

My most immediate ambition is to publish The Temple of Paris in the summer of 2014. I also plan to finish my film about young women from Afghanistan who are studying in the U.S. I have a couple other film ideas I’d like to pursue, too, and a book series in mind after The Quicksilver Legacy Series. This current series is a trilogy: The Riddle of Prague, The Temple of Paris and The Fountain of Ragusa.

Tell us about your latest release.

The Riddle of Prague was released in September. I have been thrilled by the positive response from readers and reviewers. This month the book made it to #3 on the list for Amazon’s “Hot New Releases” for Teen & YA Fiction in Action & Adventure for Kindle. I was very excited about that!

The Riddle of Prague is about 18-year-old Hana Silna who goes to Prague on a mission for her mother who is too sick to travel back to the land where she was born. Hana meets up with relatives and finds herself on an adventure where she’s trying to decode an alchemist’s riddle to find an ancient flask. Along the way she encounters a number of allies and enemies although it’s difficult sometimes to tell them apart. She meets up with Alex, the son of a U.S. diplomat, who joins her on her journey across Bohemia looking for the flask.

If you could only eat one food the rest of your life, what would it be?

A nice baguette or a perfectly ripe avocado or chocolate of any sort.

When 18-year-old Hana Silna travels to Prague to reclaim her family’s home, she discovers a riddle that may lead to a long-last flask.

The contents of that flask could change the fate of the world. When a ruthless enemy kidnaps her family Hana has to find the flask to rescue them. On her quest she meets a mysterious man with a penchant for poetry, a Gypsy girl with a haunting past, and Alex, an all-American boy who’s trying to save his sister from a crippling disease. It’s hard to trust anyone when the stakes are this high — especially when surrounded by experts in deception.

There’s only one flask, and Hana desperately needs to find it.

“Bonjour, mademoiselle. Good day to you.”

I struggle awake. My eyes feel like they’ve been super-glued shut. A heart-faced flight attendant with her hair in a neat bun is waving a breakfast tray with an omelet, a croissant, and a glass of orange juice. “Your breakfast!”

“Thanks.” I sit up and notice people onboard who weren’t there before.

“Did I sleep right through Paris?”

“Oui, mademoiselle. Is a pity to sleep through Paris.” She gives a perfunctory smile and turns down the galley way.

“You can just leave a tray for him.” I gesture toward David’s empty seat. The flight attendant blinks twice and gives a very French shrug. “He’s probably in the bathroom,” I explain.

“Mademoiselle, no one is assigned to this seat.” She hands out trays to a couple in the next row. I look under the seat. David’s bag is gone.

“At the beginning of the flight,” I say patiently, “someone was sitting here.”

“Possibly. But not now.” She nods to signal the end of our conversation and expertly pushes her cart down the aisle. I shift my breakfast tray in order to stand up. Wobbling at first from not using my legs for so many hours, I walk down one aisle to the back of the plane and then up the other side. I study the passengers carefully. At the curtain that cordons off the upper classes, the flight attendant wags her finger. I duck my head through anyway and take a cursory glance at the passengers. There’s no David Bolton. The flight attendant nods to acknowledge a small triumph.

“There was someone sitting next to me,” I repeat. “And now he’s gone.”

“Perhaps he got off in Paris.” She waves her bright-red nails to indicate that this is the sort of thing men do all the time.

“He was going to Prague.”

“He’s not going there now, at least not on this plane.” She has the last word.

It doesn’t make sense. David Bolton was on his way to Prague. Wasn’t he? I stare out the window, lost in thought, until the pilot announces our descent, and the landscape rushes upward to greet our flight.

Laura DeBruce is a documentary filmmaker and writer. She grew up traveling all over the world thanks to her father’s work with the U.S. Embassy. She and her husband spent twelve years living in Europe including Prague, Paris, Amsterdam and London where she found inspiration to write The Quicksilver Legacy Series. In Prague she worked as a lawyer for the first private nationwide television station in the former Communist bloc. It was there that she fell in love with the ancient city of Prague and its legends.

She lives in the Washington, DC area with her husband and son and an unruly Golden Retriever.


Buy the book at Amazon.