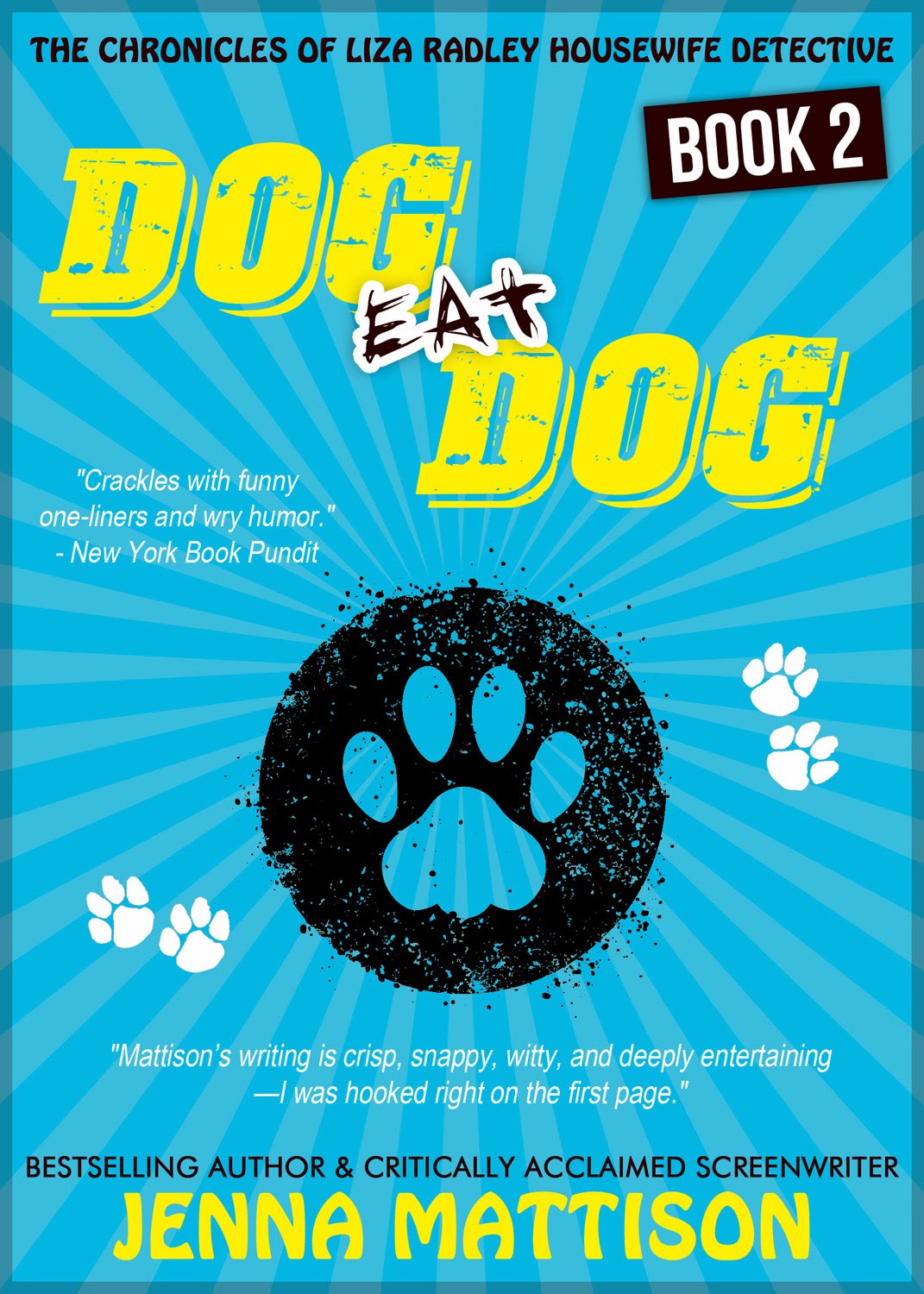 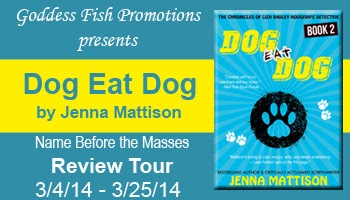 This review is done in conjunction with a virtual book tour organized by Goddess Fish Promotions. Jenna will be awarding a digital copy of Dog Eat Dog to a randomly drawn commenter at every stop during the tour.. You can see the other stops on the tour by clicking the tour banner.

Blurb: Book Two of the Eye Spy, Chronicles Of Liza Radley Housewife Detective, series brings back the antics of Liza & Jack in Dog Eat Dog. The two are knee deep in dognappers and heiresses at their newly opened Crimes Of The Heart Detective Agency. In between their investigations the will they or won't they drama of their complicated relationship is still front and center…and in the middle.

Not your typical cozy mystery!

I dove into Dog Eat Dog without any foreknowledge of what to expect. I hadn't read book one and, while I think I missed a little of the "in" jokes and whatnot between characters, I never felt lost, so can confidently say that this series can be read out of order, but perhaps you'd have a richer experience if you read book one first.

First, the things I enjoyed:

The story! I have to mention the plot first because it was great.  Completely unexpected considering the H/H started out trying to find a lost dog and whether the pickle king was cheating on his wife.

Yes, the pickle king.  Yes, it led to many fun times.

But the plot took plenty of turns and became something utterly different.  It wasn't just dog-napping or cheating, but far more complex and led to plenty of nail-biting times for me wondering just how they'd make it through alive and well.

Next, the relationship between Liza and Parella.  Fun!  Really, I suppose that sums up the whole book.  Fun.  And the secondary characters really added pizazz to the story as well. Liza's friends were a hoot.

The writing was quite good as well, and the author has a good voice for the genre. She's got a knack for clever description and a wonderful imagination.

What I didn't like?  Just a few quirky things that irritated me throughout and so affected my overall enjoyment of the book.  I didn't like the two page chapters.  They continually jolted me from the story.  I'd just start getting into the scene and WHAM, new scene with no easy segue.  I wasn't a fan of Liza and her "I'm dieting, but I must shove that last piece of pizza into my mouth." thing.  First, having a woman on a diet, and constantly harping about it but cheating anyway is so cliched and I admit to suffering many eye-rolls through the book because of it. I think it was meant to be funny, but I didn't find it so.  Lastly, why does Parella call Liza "doll" and "doll face"?  Really? Again, it may related back to book one, and maybe it's an inside joke for them, but I wanted to smack him and remind him of the decade and that he very clearly isn't Bogart.

Still, there was far more to enjoy than not and I am most tempted to go back and read book one when I have a moment to see if it explains some of the things I questioned.  I liked Liza and mostly liked Parella, though didn't have as strong a sense for him (mainly because the story is from Liza's point of view).  The plot was strong, unique and interesting and certainly had me both chuckling and then biting my nails throughout -- the sign of a good cozy mystery!

The line is long, as usual, and I grab a seat near the window as Jack orders our sandwiches. Mine sans bread. He saunters over waving a paper ticket stamped with the number 43. The red LED light behind the counter reads 34, so we’ve definitely got some time to kill. Luckily, I get a reply text from Buckmaster. Looks like the mansion belongs to an old boxing champion.

“The house belongs to an Xavier Martinez. Ring a bell? Wasn’t that the guy who bought a gold plated bathtub for his ex-wife? Maybe I’m getting him confused with someone else.”

Parella’s face lights up. “Different guy. Martinez was a middleweight. Took the prize in 2005 but kinda went nuts after that. Bit some guy's cheek off. Last I heard he lost all his money and was doped up on prescription drugs.”

“How’s he afford that mansion?”

“Not a clue. Maybe he’s got dirty fingers these days.”

I rack my brain for a clue. “Didn’t Lenny say Jameson was taken in the middle of the night but that he never heard any barking?”

“That means whoever was the dognapper either knew the dog well enough to not incite a bark or they were a professional.”

“Professional dognappers?” I snort and cock my brow.

“Okay, maybe it’s a stretch. I’d say Pinky’s still our prime suspect. If we get a hold of her credit card bills maybe we can figure out where she’s staying. We got lucky with the hairstylist tip from Lenny but I don’t think she’ll be going back there any time real soon.” 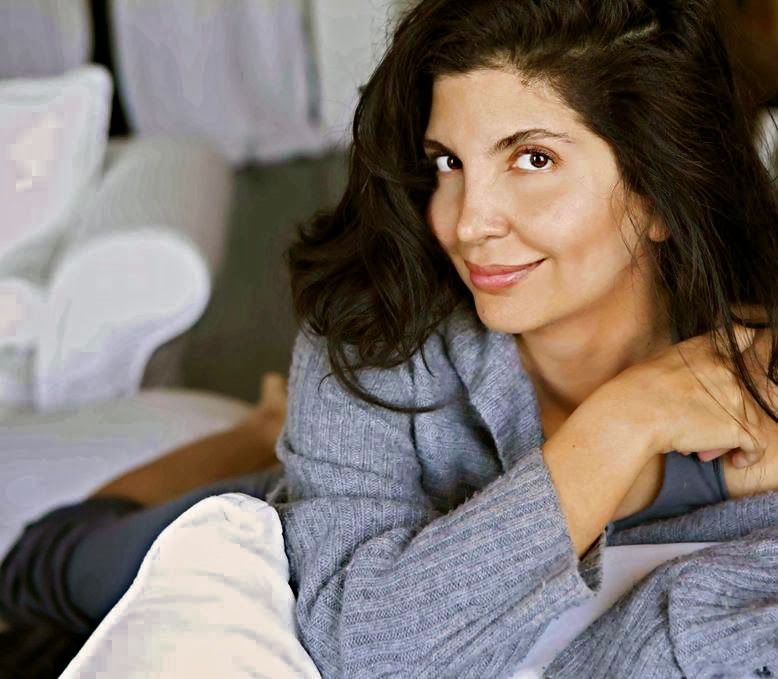 Mattison started her career in Chicago appearing on television and radio. She founded Cheshire Smile Productions, bringing to life and penning her first feature film FISH WITHOUT A BICYCLE, a festival winning coming of age comedy, which was directed by Brian Austin Green. “Fish” is now available on Netflix and garnered a limited theatrical release.

Mattison also wrote Cheshire’s second release THE THIRD WISH now available at Blockbuster and distributed by the Hallmark Channel. Lionsgate’s FOR THE LOVE OF MONEY, based on a true story of Jewish gangsters set in the 1970’s starring James Caan, Paul Sorvino, Edward Furlong and Jeffrey Tambor was also produced and written by Mattison and was released theatrically in the US & Israel. In 2012 The Academy Of Motion Pictures Arts & Sciences honored Mattison by displaying her screenplay of For The Love Of Money in the permanent collection of their library. Most recently Jenna wrote COMMITTED, a TV movie which wrapped production this spring to premiere on television under the title Deadly Revenge. In development is GHOST STATION which she will pen and co-produce with Michelle Weisler (The Ring, The Trouble With The Curve) to be shot in Canada summer 2014.

Her bestselling debut novel The Tree Of Jesse, a paranormal romantic thriller, was released this spring to critical acclaim and is available worldwide. Mattison’s most recent novel Eye Spy, the first in a comedic romantic suspense series, was released in July and hit bestseller status within the first week. Book two of the series, Dog Eat Dog, will be released this fall.