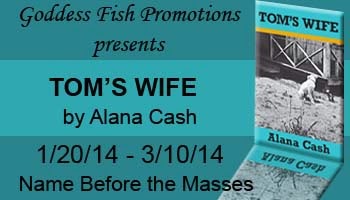 This post is part of a virtual book tour organized by Goddess Fish Promotions. Alana will be awarding the winner's choice of a Screenprinted Camisole - "What Happens in the Bedroom Stays in the Bedroom" or a Brass Nuts T-Shirt - screenprinted "Brass" with 2 brass hex-nuts sewn to collar, to one randomly drawn commenter during the tour. (US ONLY)

We'll turn the blog over to Alana now...

I have only been in love a couple of times in my life and one of those times was with a drummer in a Latin band. He played with different groups and I got to know all kinds of Latin music – salsa, meringue, cumbia, bosa nova and more. I went to the different venues where he played and made a few friends. From the friends I learned to cook different types of food and learned the different types of dances. I got invited to visit a family in Puerto Rico where I studied Spanish for a week. Returning from my vacation, I decided I wanted to learn play percussion. So I took lessons in bongos and castanets. A few times – very few – I was invited to play with the professional musicians in front of an audience. It was quite unusual to see a female bongo player and the musicians got tips for that and got invited back, but I didn’t think I was good enough, so eventually I stopped accepting the invitations. And the relationship with the drummer didn’t work out very well, but it was a great time in my life. A really great time.

I gave the bongos away, but I kept the castanets and I used to play them sometimes at home listening to the Gypsy Kings. One evening I was playing with the windows open and a man came to my door explaining that his wife was a flamenco dancer in Spain and he asked if I happened to be a flamenco dancer as well. That was pretty flattering since I wasn’t sure I played well at all, but apparently I played well enough to attract strangers off the street. I did play castanets once with a band on my birthday – and once under the table at a restaurant in Serbia. I was in Novi Sad doing some research for a project and the family I was staying with invited me to dinner at the restaurant (steak dinner for five people with wine was a total of $22). A gypsy band was playing and singing. They had five-string guitars and sang in seven different languages. I had the castanets under the table and played along with them. No one complained, but I did stop after a couple of songs.

Honestly, I would have preferred to have music as my art form over writing and when I was a child I begged for a guitar, but didn’t ever get that for Christmas. I took piano lessons for a few weeks, but the teacher moved away, and anyway I didn’t enjoy playing piano.

It’s the Great Depression and 19-year-old Annie Huckaby is almost resigned to marriage with Tom. He works at a coal mine during the week, leaving Annie to take care of the house and their infant son. Tom’s Native American friend Jim takes care of the farm. Her best friend, Twila, visits every day and helps Annie make a little money selling eggs to the café on the highway. And there’s church on Sunday. Annie’s not always alone, but most times she feels like it…until one afternoon a peddler named Jake Stern steps onto the porch, tips his hat, and starts a world of trouble.

The first time Annie ever saw Jake Stern, she was sitting with Twila on the porch after dinner. They’d been watching the men working on the new barn and they heard Butch growling and turned around and saw him. It was peculiar to see a fellow in a white shirt on a weekday, and she had to look away behind him, at the big oak tree.

ABOUT THE AUTHOR: Alana Cash is an award-winning author and filmmaker who used to spend summers on her grandparents farm at the foot of the Ozark Mountains in Arkansas. When she was ten, a red-headed stranger rode up on horseback asking her grandfather if there were horses needing to be broken. The cowboy wore spurs and a cowboy hat and was pretty exciting. Decades later, Alana wondered if any of the women living in that farming community got a crush on that wandering cowboy, and intending to write a short story about that romantic day, Alana ended up writing the novel TOM’S WIFE.