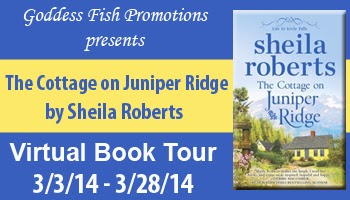 This post is part of a virtual book tour organized by Goddess Fish Promotions. Leave a comment or ask the author a question for a chance to win a $25 B & N gift card and an eCopy of The Cottage on Juniper Ridge, awarded to one lucky commenter at the end of the tour. Click the tour banner to see the other stops on the tour.

A special welcome to Sheila Roberts, who is sharing five fun and interesting things about herself.

It’s always fun to know a little bit about the author of the book you’re reading, isn’t it? Here are five factoids about little old me.

Some authors are shy, private people. I’m afraid I don’t fit in that category. I’m such a hambone. If there’s a spotlight somewhere you’ll probably find me trying to poke my face in it. I love book release parties, partly because I like parties, period. But also because I have a captive audience. Heehee. I can orchestrate the fun and games and yak with readers and expound on whatever and my poor friends are stuck there listening to me. Heehee again.

I recently put my phone number out on the Twitter stream, thinking I was sending a direct message to my friend. It would have sat out there forever if she hadn’t sent me a message with urgent instructions to DELETE!

3.) My toes are going crooked.

The third toe on each foot. I call them my bow-legged cowboy toes and keep trying various ways to straighten them. So far nothing has worked. This is my punishment for all those hot high heels I wore in the eighties.

Wearing those hot shoes. By the end of the night I was usually playing barefoot. (Well, barefoot in pantyhose – anybody remember those?)

I have a great husband. We’ve certainly seen our share of ups and downs over the years but those hard times have made us closer. Maybe those hard times are why I like to write books with happy endings. Life is tough enough as it is. Who wants to read something depressing? Not me!

Can a book change your life? Yes, when it's Simplicity, Muriel Sterling's guide to plain living. In fact, it inspires Jen Heath to leave her stressful, overcommitted life in Seattle and move to Icicle Falls, where she rents a lovely little cottage on Juniper Ridge. And where she can enjoy simple pleasures—like joining the local book club—and complicated ones, like falling in love with her sexy landlord, Garrett Armstrong.

Her sister Toni is ready for a change, too. She has a teenage daughter who's constantly texting her friends, a husband who's more involved with his computer than he is with her, and a son who's consumed by video games. Toni wants her family to grow closer—to return to a simpler way of life.

Other women in town, like Stacy Thomas, are also inspired to unload their excess stuff and some of the extra responsibilities they've taken on.

But as they all discover, sometimes life simply happens. It doesn't always happen simply!

She’d just finished cleaning up after dinner when Dean came into the kitchen. “Hey, babe, have you seen my old army jacket?”

The one he hadn’t worn in ages? The one she’d taken to The Kindness Cupboard?

“I can’t find it anywhere.”

Uh-oh. This was not going to be a good conversation. Like a lawyer she started with a strong opening argument. “You haven’t worn that coat in forever.”

“Well, I want to wear it tonight to the basketball game. It’s not in the coat closet. Did you move it?”

She’d moved it all right. What to do now? She could feign ignorance, say she had no idea what had happened to his old army jacket, but Dean wasn’t stupid. He’d search all the closets and find it in none, and then he’d be right back here in the kitchen, demanding to know what she’d done with it.

She switched tactics. She closed the distance between them and put her arms around his neck. “Deano.”

His expression turned wary. “Oh, no. Why do I get the feeling I’m not going to want to hear what you’re about to say?”

“You know how I’ve been getting rid of things, lightening our load?”

She didn’t have to say any more. He looked at her as if she’d just told him that the Seattle Seahawks had been sold. “No.”

“I was only doing what Muriel Sterling said to do in her book. If you haven’t used something in three years you should get rid of it.”

This was met with incredulity. “You got rid of my jacket?”

“You were glad to hear I was getting rid of stuff. Remember?”

“Your stuff, Stace, not mine. Where does Muriel Sterling say you get rid of your husband’s things without even asking him? And I don’t have that much.”

“Well, look at it this way. Now you have even less,” she said, trying to lighten the moment. Okay, maybe it was more a case of trying to avoid admitting she was wrong.

Her attempt failed. Dean grumbled once in awhile, but he rarely got angry. Right now, he was angry. He stood stiffly in front of her, hands on his hips (instead of hers), looking like a thundercloud with legs.

“I don’t want less. I want my army jacket back,” he growled. “Or maybe I should go through your closet and start getting rid of your clothes without asking. Or better yet, how about I get rid of that box of Santas? I bet they didn’t go.”

“I use them,” she protested. And she couldn’t remember the last time he’d worn that jacket. Why did he want it now, all of a sudden? Because she’d gotten rid of it, of course.

“But I took it to The Kindness Cupboard.”

The thundercloud looked ready to zap her with lightning. “I guess you’re going to have to go there tomorrow and get it back.”

Take back a donation? That would be tacky. “Right. What do you expect me to say to Janice Lind?”

“Say you made a mistake. Say you gave away something that wasn’t yours to donate.”

He was looking at her steely-eyed, like a man betrayed. “Okay,” she said. “I’ll get it back.”

“Thank you,” he said stiffly.

She kept her hold on him. “Deano, I’m sorry. Am I forgiven?”

The thundercloud vanished, blown away by a long suffering sigh. “Yes.” Now his arms moved around her waist. “And I do appreciate you getting rid of household stuff that we don’t use. But in the future, can you do me a favor and ask me before you decide to dump my personal items?”

She could do that. She nodded and they kissed. Dean wore a different jacket to the Icicle Falls basketball game. Problem solved.

Except the next morning when she went to retrieve the army jacket she found that her problem hadn’t been solved at all. In fact, it had grown.

“Not here?” she repeated weakly.

“We send our clothing donations over to Goodwill in Seattle to get sold in one of their stores,” Janice said. “That way no one in town has to be embarrassed being seen in something someone else donated. “Your things, along with all the others we received over the last few days got taken to Seattle.”

Oh, boy. How was she going to tell Dean about this?

She wasn’t. She was going to have to go over the mountains and scour every Goodwill in Seattle. She grabbed her cell phone and started making calls to her posse. 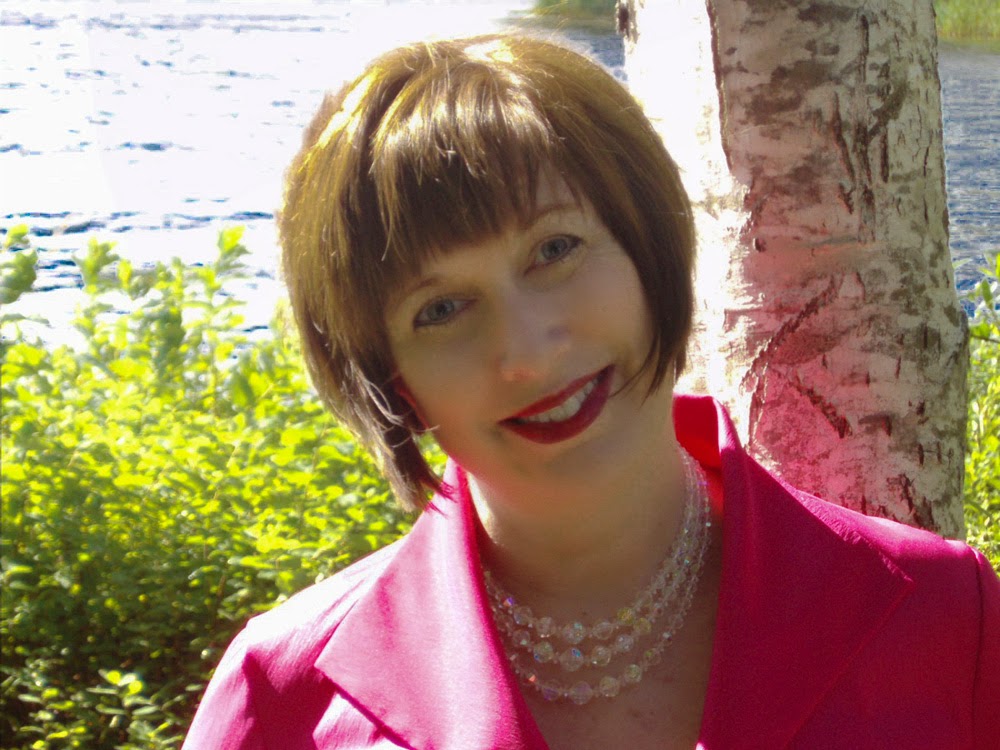 Sheila Roberts is married and has three children. She lives on a lake in the Pacific Northwest. Her novels have appeared in Readers Digest Condensed books and have been published in several languages. Her holiday perennial, On Strike for Christmas, was made into a movie for the Lifetime Movie Network and her her novel The Nine Lives of Christmas has been optioned for film. When she’s not writing songs, hanging out with her girlfriends or trying to beat her husband at tennis, she can be found writing about those things dear to women’s hearts: family, friends, and chocolate.

Readers can find me on: