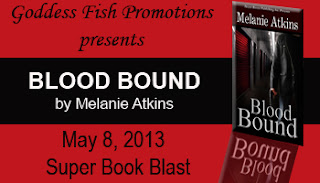 This post is part of a Virtual Book Tour organized by Goddess Fish Promotions.

Melanie will be awarding the winner's choice of a backlist eBook to a randomly drawn commenter during the tour. Click on the tour banner to see the other stops on the tour.

Fueled by grief after his fiancée is brutally murdered, Detective Sam Walker focuses on finding her killer -- a calculating predator who binds books with human skin.  Dani Barrington, the newest member of NOPD's Victim and Witness Assistance Unit and a survivor of another frightening attack, helps him discover the terrifying link between the monster's known victims.  Despite his anguish, Sam is struck by Dani's strength and determination, especially when her inquisitive  nature makes her the killer's next target.  He must find a way to protect her or risk losing the one woman who can bring his dead heart back to life.

"Forgive me, Father, for I have sinned." NOPD Detective Sam Walker's low rasp echoed inside the tiny confessional within the deep recesses of St. Mary's Church. He pressed his damp palms to his thighs. "It's been nine months since my last confession."

"You must voice your transgressions, son, to get them off your chest. It's the only way to gain absolution."

"Sam, tell me the truth." Father O'Malley cleared his throat. "Is this about Kristen?"

"She died a horrible death," Sam whispered, his heart breaking all over again for his fiancée and the family he would never have with her.

"Eight fucking -- sorry, Father." Sam broke off and swallowed, doing his best to regain his composure. "Eight long months. I thought I was coping, but I can't get past it. Especially since I'm the reason she's dead."

"How did you come to that conclusion?"

Sam pressed his lips together. Every time he thought about his fiancée's brutal murder, his gut clenched. He should have taken her to dinner that night like he'd promised, instead of letting the job get in the way. The Glock riding his hip was a constant reminder he'd been a detective first, and her intended husband second.

God should damn me straight to hell.

Father O'Malley shifted inside the tiny booth, and the ornate screen between them shuddered. The too-sweet odor of funeral lilies wafted over Sam.

"You didn't murder her, my son. Some sick, depraved individual did it."

"I was supposed to protect her."

"You were doing your job."

"When I should have been with her. Keeping her safe." Agony pierced his soul. He dropped his elbows to his knees and hung his head. His voice broke. "I let her die."

"You didn't let her die, Sam. A terrible thing happened. It wasn't your fault. God doesn't hold you responsible."

"It's my fault she's gone. I can never do enough penance to make up for it." Sam shuddered. "Not in this lifetime."

"I want you to say one Our Father and one Hail Mary."

"That doesn't even scratch the surface. I can't even--"

"Wait. I'm not finished." Father O'Malley regained his poise, and his strong, even tone reverberated in Sam's ears. "I also want you to pray for the person responsible for Kristen's death."

"Hell, no!" Sam blurted, the idea of absolution jolting his brittle psyche. "I can't pray for that sick son of a bitch. He's killed four women, including Kristen, after brutalizing them, and we have no idea who he is. We're working day and night--"

"That's your penance, son." Father O'Malley said, gravely. "In addition, you must perform the Act of Contrition and say the Rosary. Don't let that individual's cruel soul steal yours."

Melanie Atkins a multi-published author of romantic suspense, an editor for an online publishing company, and an avid reader. Writing is more than an escape for her—it’s a way of life. She grew up in the Deep South listening to tall tales and penning stories about her cats. Now she writes gripping stories of love, suspense, and mystery with the help of her furry little feline muses.