Review: A Legacy of Revenge by Harriet Schultz 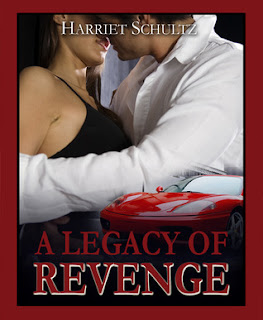 When a fourteenth-century Scottish oath leads to murder in present-day Boston, the victim's devastated widow seeks revenge. Determined to find and punish the person who killed her husband Will, Alexandra Cameron joins forces with his best friend, Diego Navarro.

The handsome, wealthy and powerful Argentine never expected to win Alex’s heart, yet two years after the senseless killing, their love blazes with heat and passion. Their bliss is threatened by a Scotsman who blames the couple for the death of his son — Will Cameron’s murderer. The ruthless predator targets Alex and forces the deadly game of revenge into its next round.

In this second book, It has been two years since Will Cameron’s body was discovered in a Boston alley, and his widow, Alexandra, now living in Boston, has become very close to Will's best friend, Diego Navarro.

I had forgotten a few details of the first book, but this author very cleverly included facts that made certain that you were never at a loss for what was going on.

This story, like the first, jumped into high gear almost immediately. I didn't want to put it down, but I had to once in a while, just to catch my breath. This book has a lot of twists and turns. This author has a magical way with words, she keeps you on your toes the entire book.

Again, there is a beautiful love story. It had plenty of heat, but the emotions were primary to the relationship. And the love story fit in so well that you could see that it was a very important portion of the whole plot in this tale. Without it, the story wouldn't have worked. I know that I said this about the first book, but it is so important to this book also, that I have to mention it.

I didn't know that there would be more to write about after the first book, but there is plenty going on. This is so important and exciting and I can't believe that I didn't realize that there was more to know after reading the first book.

I really don't know what more to say. If you are looking for an awesome romantic suspense, this is the book for you. I can not remember when I have read a book that was so intense before. This author is one of the best I have discovered in years. You don't want to miss reading this book.

5 Flowers - I loved this book! It's on my keeper shelf! I highly recommend it.

FTC Disclaimer: I received a copy of this book from the author in exchange for my honest opinion.
Posted by MJ Thomas at 12:01 AM