Medicine Man I: The Chief of All Time by S. R. Howen - Review tour and giveaway 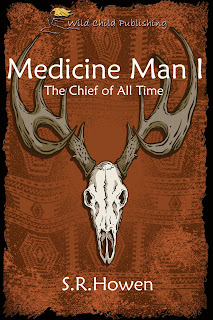 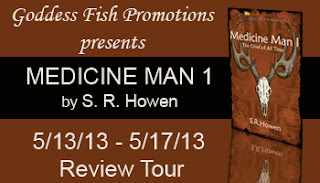 S.R. will be awarding a $10 Wild Child Publishing GC to a randomly drawn commenter during the tour, so leave a comment on this post and you're entered!

Shannon Running Deer is American Indian by blood, but he has forsaken his people's ancient ways to embrace the "modern" world as a wealthy, highly successful trauma surgeon.

His comfortable existence begins to unravel when, seemingly by chance, Shannon finds himself gradually drawn into the past. Pursued by an ancient evil, he knows he can change the future, if he can survive the past.

In the tradition of Diana Gabaldon, S.R. Howen's MEDICINE MAN is a distinctive and atmospheric novel full of spirituality, mystical time travel, romance, passion, and suspense.

With descriptive and detailing writing, author SR Howen introduces us to a world of intrigue and mystery.

This book is unlike anything I typically read.  With "real life" interwoven with dreams and visions, and tradition versus modern beliefs, there are times we aren't sure just exactly what is true and what isn't.  Our main character, Shannon Running Deer, frequently felt the same!  I liked him, though, and that attachment kept me turning pages.

I wasn't as fond of  Morning Dove as I couldn't get a grip on her. Was she good or evil? Should our hero be with her or not?  Eventually, we get the answers to those questions, but it made my feelings for her ambivalent, which affected some of my enjoyment of the story.

The plot itself was very interesting and well-constructed. Occasionally, it slowed a bit, but would pick right back up again and start with heart-pounding excitement.  I never thought of stopping reading, as I needed to know how things would turn out.

Author SR Howen is very talented and skilled with the written word.  I'd absolutely pick something of hers up to read again.

I ducked behind the lab table and made my way to the far side of the room. I crouched behind the drawer unit of the farthest table. The wolf didn’t follow me. I couldn’t chance looking around the corner of the table to see where he was. The soft sounds of someone walking across the floor made my nerves stretch tight and sing with fear.

“I’ve got everything put together,” a woman said.

The second person made a small sound of agreement, but didn’t speak. Pages rattled, and a drawer opened.

“The instructions are in here. I included a set in the shell itself--just in case you need them.”

Another sound of agreement from the second person.

“It would have been a lot easier to put this stuff on a disk.”

“No disks. I already told you--no trail of any sort.” He sounded angry and annoyed.

A key turned in a lock, and a hinge squeaked. Something heavy got set down on the lab table I had been at earlier.

What was going on?

“You aren’t supposed to be in here,” Doctor Martins said.

Her voice had risen in tone--someone caught doing something they shouldn’t have been.

“I have to check all the doors. Once every hour on this floor. Who are you?” I assumed it was a guard asking.

“Doctor Martins,” she answered. “This is my lab.”

The guard’s shoes made a sound on the floor. “Well, you need to lock the door, even when you’re inside.” The door opened again before it shut with a click. The guard had locked the door from the outside. I wondered briefly if I needed a key from the inside.

“You told me there wouldn’t be a guard,” the man said.

“I don’t even know who that guy is. The other guard was a lazy fool. He spent most his shifts on the phone with his girlfriend.”

“And if this new guard reports you were here?”

Another cabinet opened, and something else got set on the lab table.

“How much is here?” the man asked.

“What we agreed on--you could vaccinate everyone in China,” Doctor Martins answered. She let out a nervous little laugh.

“Everything I promised. It self-replicates, so you can use it in the field--and each time it replicates the structure mutates so it can fight bigger and better bugs.” She laughed again.

There was a slight sound, like the brushing of fabric over something hard. One of the two gasped followed by a loud thump that made me startle. I barely kept from smacking my head on the metal drawers behind me. A sulfurous smell drifted across the room.

Latches snapped shut, and papers got shuffled. What had happened? I carefully peered around the edge of the drawer unit. Doctor Martins lay on her back on the floor. Blood seeped from beneath her.

Medicine Man I: The Chief of All Time (Wild Child Publishing): http://www.wildchildpublishing.com/index.php?main_page=product_info&cPath=106&products_id=404&zenid=8e8ea1c48ee3fc580ce3355a6fbb25e8

Medicine Man I: The Chief of All Time (Kobo ): http://www.kobobooks.com/ebook/The-Chief-of-All-Time/book-_hYNNKIra06osXQdjttbtg/page1.html?s=vNIlqpUbIUaJ6gin-i4ZOA&r=1

Blog: Critters at the Keyboard http://srhowen1.blogspot.com/