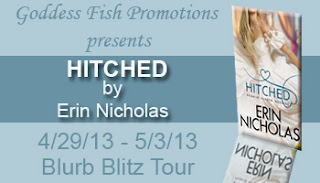 Erin will be awarding a backlist eBook at every stop, and a $15 Amazon or BN GC to a randomly drawn commenter during the tour, so comment today AND follow her tour (if you click on the banner above, it'll take you to a list of tour stops)! The more you read and comment, the better your odds of winning. You could be introduced to a great new author AND win a really cool prize!

And she thought the bridesmaids dresses were her biggest problem...

But Allie's determined to restore her family's happiness, and if tying the knot with longtime family friend, Josh Brewster, is the way to do it, then she'll walk down that aisle, toss that bouquet and drink that champagne. Oh, she'll definitely drink the champagne.

There’s only one thing that could get Gavin Montgomery back to Promise Harbor. And she’s about to say I do to another man. Now he’s back to claim what’s his—even if he has to do it in the middle of her wedding.

Allie is shocked—and okay, a little turned on—when Gavin literally sweeps her off her feet. Safe in his arms, she succumbs to fatigue, stress, and yes, the champagne, only to wake up in his bed. In Alaska.

Now that he’s put four thousand miles between Allie and all her responsibilities, Gavin’s determined to show her that they can make a life together. If he has his way, the next wedding Allie will be planning will be theirs.

Warning: Contains a guy so in love he’s willing to break up the wedding of the season, a bride who just needs to get to, well, anywhere else, and enough hot sex to take them from New England to Alaska and back again.

“Dearly beloved, we are gathered here today to unite this man and this woman in holy matrimony.”

Every head swiveled toward him as Gavin Montgomery strode purposefully down the center aisle of St. Mark’s Methodist Church.

“Gavin?” Allie’s shocked question was the first thing he heard over all the other noises—gasps, whispers, creaking pews.

The second thing he heard was the groom’s question. “This is Gavin?”

The groom was Josh Brewster. Of course it was. The Brewsters had been close friends with Allie’s family for years. Who else but Mr. Perfect would be standing next to Allie at the altar?

Nobody was more dearly beloved that Josh Frickin’ Brewster.

“What do you think you’re doing?” Josh demanded.

Josh moved to stand between Gavin and Allie. “We’re kind of in the middle of something.”

“Yeah, this can’t wait.” Gavin looked past Josh to Allie. “I need to talk to you. Now.”

Her eyes were wide and she looked pale. Like she-might-faint-any-minute pale. But he wasn’t so sure it was from the shock of seeing him. She’d looked terrible in the wedding announcement in the Promise Harbor Times, too. She was way too thin. She was too pale. She looked—sick and tired.

He suspected, based on the two a.m. phone call he’d received, that she was also hung-over.

He knew he looked like shit, himself. He felt like shit. He’d been out in the field for the past two weeks and hadn’t known Allie was getting married until last night. He needed a haircut, his beard had been growing for two weeks, he hadn’t slept or showered or eaten in… he wasn’t sure. A long time. Once he’d heard the phone message from Hayley, his best friend in Promise Harbor, nothing had mattered but getting to Allie. Before she married another man.

Even with owning one-twelfth of a small private jet and living forty miles from the pilot, it took awhile to get from Alaska to Massachusetts. He’d landed in time to rent a car and drive like a bat out of hell to get here. Just as she’d been about to say I do.

In spite of the thinness of her cheeks and the dark circles under her eyes, she looked gorgeous to him. Seeing her for the first time in over a year shook him. He wanted to grab her. He wanted to carry her out of here. He wanted to hold her and take care of her.

He wanted to feed her.

Good lord, she’d always been thin but now she was downright skinny. Her long blond hair was piled on top of her head in a mass of curls and baby’s breath. Her dress was white and lacy and left her shoulders and arms bare, showing off smooth skin that was as white as the dress. She wore three-inch heels, putting her at five-ten and her big green eyes were watching every move he made.

He could work with that.

He started toward her but Josh moved to block him. “I don’t think so, Gavin.”

Gavin sighed. He’d known this was going to be a spectacle, of course. Barging into a church during a wedding and stealing the bride created a spectacle by anyone’s definition.

The church was completely silent and he saw camera flashes going off from every direction. He was pretty sure this particular spectacle was going to end up on the internet.

“Listen, I can do this here in front of the whole town. I don’t mind. I’m leaving here with Allie one way or another. But I think keeping some of this private might be appropriate.” He leaned around Josh to look at Allie. “I have some things I need to say before you say I do to another man, Al.”

Josh sighed, stepped closer and lowered his voice. “Don’t do this, Gavin. Haven’t you messed with her enough? Just let her be happy.” “That’s exactly what I want to do,” Gavin insisted, not backing down an inch. “Is that what you want?”

“I’m standing next to her in a tux in front of a minister. What do you think?”

“I think that if you don’t let her talk to me, you know that she’ll always wonder. You don’t want that do you? To have your wife wondering about another man?”

Josh blew out a long breath and shoved his hand through his hair. Then he half turned to his bride. “Allie?”

“What would I wonder?” Her voice was weak and again Gavin wasn’t sure it was completely because of shock. She sounded and looked exhausted.

“You’d wonder what I had to say to you so badly that I would fly over four thousand miles so I could rush in here to stop your wedding.” 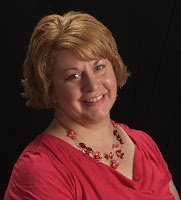