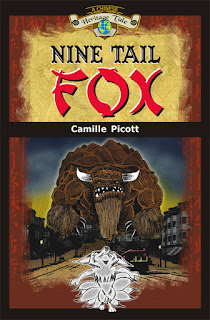 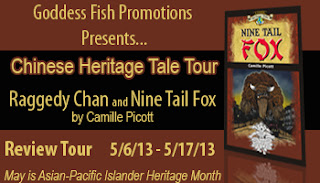 When fifth-grade Emma Chan-McDougal is ridiculed by her classmates for being part Chinese, she's devastated. To ease Emma's wounded self-esteem, her aunt, a Chinese immigrant, spins the mythical tale of a brave little Nine-Tail Fox named Ainu who lives in San Francisco.

In a parallel animal world that comes to life when humans slumber, Ainu Nine-Tail and her mother face off against Chih Yu, an ancient demon who feeds on hatred. As the last of their clan, the Nine-Tails are honor-bound by a family oath to defend the Chinese animals from the demon. When Chih Yu kills her mother and leads an angry mob against Chinatown, Ainu is left to complete the task alone. Raw with grief and only partially trained for battle, Ainu must reach deep inside herself to find the wisdom and courage to save her people.

Will the journey of Ainu Nine-Tail help Emma find the strength to confront the school bullies and win back her confidence?

In this modern Chinese fable, Chinese-American author Camille Picott draws on her heritage to weave a story of courage, truth, and adventure.

Nine-Tail Fox from Camille Picott is a fable that Emma's Aunt Grace tells her niece when Emma comes across her own encounter with being made fun of because she's different. The fable is bookended by Emma's story--and, to me, her story was the weakest part of the book. It does give a reason for the fable to be told, but the ending left me uneasy...it was too easy and too pat.

I had also read the first book in this series and had hoped this book would be set up similar--with the action returning to the today world of Emma so we could see some character development that paralleled the action in the fable. I hope that Ms. Picott will return to that format in future books.

The fable itself, though, was a very interesting read--reminding me a bit of Animal Farm by George Orwell-- in the animals you could see the weaknesses and foiables of humans--and this part would be wonderful for parents to share with their children.

Rated 4 Flowers - This was a very good book! I'd recommend it to my friends.

A young nine-tail fox stood at the railing of a freighter steamship, white fur ruffling in the nighttime breeze. Her real name was Lang-Dao, which meant “bright leader,” but everyone called her Ainu. It was her mother’s nickname for her, meaning “sweet girl.”

Most of the humans on the ship slept in their bunks, leaving the deck swathed in silence and darkness. Hiding from those few humans still awake, Ainu and Mama Nine-Tail stood in the shadow of a big coiled rope.

The ship rode the ocean’s deep, even breaths. Ainu stared at the lights spangling the silhouetted city. The tall buildings yawned up at the sky like jagged teeth, seeming on the edge of violence.

The moon, three-quarters full, hung crookedly in the night. It shed light on a small island between the city and freighter. No plants grew on that mound of bronze-colored earth. Two long arms of land sprouted on either side of it. In the rippling light, those narrow peninsulas gave the island the appearance of having wings.

Studying that harsh landscape and, beyond it, the massive mainland city, Ainu shivered.

“That is because Chih Yu is there,” Mama said. “He spreads his hatred for the Chinese among the American animals.”

“Which is why I must begin my training as soon as we get to shore,” Ainu said. She hoped she didn’t sound too eager. It wasn’t good to be excited when her fellow animals suffered. “So I can help protect the Chinese animals,” she added.

Mama nodded. “Master Zheng sent me word of events in America before we boarded,” she said. Master Zheng was Mama’s longtime friend. He sent her regular reports on Chih Yu’s activities in America. “We could very well find ourselves part of the greatest battle against Chih Yu since the time of the Yellow Emperor. Chih Yu has become corporeal, my daughter.” 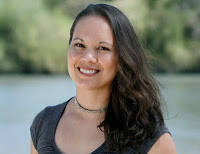 Camille Picott is a fifth-generation Chinese American. She writes science fiction and fantasy books with Asian characters and/or Asian settings. Camille grew up reading speculative fiction stories largely devoid of Asian characters and culture. This, coupled with a passion for her heritage, is the reason she strives to bring some aspect of Eastern myth, legend, culture, and ethnicity to all of her writings.


a Rafflecopter giveaway
Posted by MJ Thomas at 12:01 AM