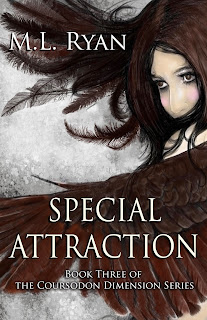 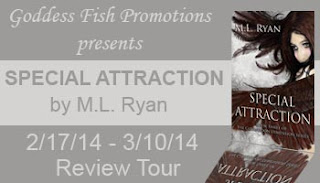 This review is in conjunction with a virtual book tour organized by Goddess Fish Promotions. One randomly drawn commenter will receive a $20 Amazon/BN GC.

Thanks to a magical transplant from an inter-dimensional enforcer, Hailey Parrish can transform into a hawk. When someone begins dismembering hikers along the Appalachian Trail, the enforcers make use of her feathery talents to pursue the killer. Unfortunately, like most things in Hailey’s life, there is nothing ordinary about the assignment. Their target turns out to be maddeningly elusive, they rescue a stray dog that makes a sewage treatment plant seem pleasantly fragrant, and stopping the murders turns out to be the least of their worries.

We featured the first book of the series here. This is the third book and it was hold-onto-your-seat full of action and humor. Oh, and romance. Do NOT forget the romance. Alex (pause for heavy sigh) is an absolute dream and Hailey's life has not been the same since she met him and Sebastian. And, she wouldn't have it any other way.

Even though this is the third book in the series, it can easily be read on its own. Ms. Ryan gives just enough details of what happened previously that you don't feel lost. I'm sure, though, that reading it in conjunction with the other books could only make things better. I especially would like to read how Hailey and Alex (pause for heavy sigh) got together.

It was a quick read... I read it in one sitting, which these days is not easy for me, just because of how busy I am, but once I started it, I could not put it down. And there were several laugh out loud moments. Ms. Ryan has created some wonderfully quirky characters that I just fell in love with...and Alex (pause for heavy sigh), let's just say he's my new book boyfriend.

Don't take my word for how awesome he is, though. Take a look at this excerpt:

After a cursory hug, my mother stepped back and surveyed me from head to toe. For once, I was confident she’d have something positive to say. I’d kept up with the hardcore workout schedule Sebastian developed to keep my destructive power in check. I knew I looked fantastic.

“Hailey,” she declared finally, “now that your body isn’t so pear-shaped, you have a lovely figure.”

Wow. Only she could put me down and pat me on the back all in the same statement. Rather than be insulted, I really needed to appreciate her mastery of the backhanded compliment.

Finished with me, her penetrating gaze shifted to Alex. “And I suppose this must be your boyfriend.”

There was no question involved, and I knew when she said “boyfriend,” she really meant “the pervert that must be ravishing your body without the benefit of marriage.” I refused to take the bait, however, and plastered a perma-grin on my face that would make any cheerleader proud.

“Yes, this is Alex. Alex, these are my parents, Tom and Barbara Parrish.”

Alex flashed one of his glorious smiles, which, unlike mine, was actually genuine. “I am so please to finally meet you both,” he said smoothly. Huh. He sounds like he actually means it. Go figure. 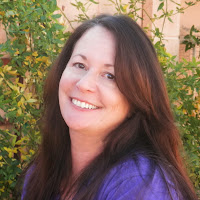 M.L. Ryan is a professional woman - which is not to say that she gave up her amateur status, but rather that she is over-educated with a job that reflects her one-time reluctance to leave school and get "real" work – and she spends a lot of time in that profession reading highly technical material.

She has many stories rolling around in her head, and she finally decided to write some of them. She prefers literature that isn’t saddled with excruciating symbolism, ponderous dialogue or worldly implications. She also doesn’t like plots so reliant on love at first sight that it makes her feel like her head might implode.

She lives in Tucson, Arizona with her husband and teenage son, four cats, two dogs and an adopted desert tortoise.

Buy the book at Amazon or Smashwords.
Posted by MJ Thomas at 4:00 AM